You are here: Home / Homesteading / Can Farm Life Boost Your Immunity? 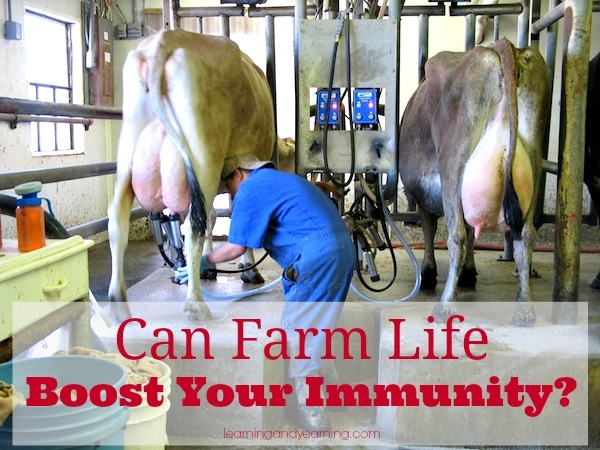 The following article is written by Edwin Shank, a farmer from whom I just recently began buying raw milk. Edwin’s milk is from grass-fed Jersey cows, and if you’ve never had milk from a Jersey, you don’t know what you’re missing. There’s just so much more cream than the milk I had been getting which was from Holstein cows. Cream is where it’s at!!!!

Be sure to visit Edwin’s website Your Family Farmer. He delivers milk to numerous locations in PA, but even if you’re not in PA, the website has recipes for everything from cooking pastured meats to making kombucha. And be sure to check out ‘Fresh Thoughts’ where Edwin posts articles just as good as the one below.

What is it About Cows?

It seems we were created to live in harmony with these gentle mothers…to be co-dependent. How else can we explain the historically proven phenomena that persons who live closest to the cows are often the healthiest, and strongest of their society?

Over 300 years ago, country folk wisdom observed that young ladies, whose job it was to milk the family cows, were immune to the deadly smallpox epidemics. While others were dying of the feared smallpox, the milkmaids could safely tend to the sick and yet not contract the illness. It seemed like magic!  As you can imagine, milk maids were highly sought after young women. Not only were they healthier, they were also prettier. The scars that marred the complexion of the smallpox survivors could not touch the pretty cow girls. (Source)

It took the brave work of British farmer Benjamin Jesty to prove that the milk maids’ seemingly supernatural protection was simply this: Their exposure to the common cowpox made them immune to the deadly smallpox. (Source) Farmer Jesty then took it one radical step further and intentionally exposed his wife and sons to cowpox virus to give them the coveted immunity and save their lives. Of course he was laughed at and derided by the medical experts of the day. It was 20 years until Dr. Edward Jenner famously took up this ‘farmer idea’ and the rest, they say, is history. (Source)

A Cure for Allergies?

A few days ago, the NY Times published a research article entitled,  A Cure for the Allergy Epidemic?  Epidemic is not an exaggeration. Over 3,000 people die from asthma attacks every year. This works out to nine tragic deaths by asthma per day, every day! These are sobering facts. This is a funeral reality for families somewhere in America every day. It is only normal for parents, and others who care for the health and wellbeing of our communities, to ask the obvious question. What can we do to protect ourselves and our loved ones from a similar tragedy?

Naturally any mention of a cure for an annual tragedy of this magnitude gets our attention. But the subtitle was the real eye popper.  “Will the Cure for Allergies come from the Cowshed?” A barn? A cow barn? Could exposure to a cow’s environment still be the secret to vibrant health?

Dr. Mark Holbreich, an allergist in Indianapolis thinks so. Dr. Holbreich recently discovered that, even though a full 50% of Americans have evidence of allergic sensitization, Amish dairy farmers and their children are remarkably free of allergies and asthma. Only 7.2% of 138 Amish children tested by Dr. Holbreich showed sensitivities. So what protects the Amish from the allergy epidemic that kills over 3,200 Americans every year?  Dr. Holbreich says it’s farm dirt, microbes and raw milk. Here are some excerpts from the research:

“Erika von Mutius, a doctor and epidemiologist at Munich University in Germany who has led much of this research, suspects diversity is important. Farms with the greatest array of microbes, including fungi, appear to be the most protective against asthma.”

“Timing seems to matter tremendously. The earlier exposure begins, it seems, the greater the protection–and that includes during pregnancy. Children born to mothers who work with livestock while pregnant, and who lug their newborns along during chores, seem the most invulnerable to allergic disease later.”

“Here, the farm effect dovetails with the burgeoning science on the prenatal origins of disease generally. What happens to your mother during the nine months before your birth may affect your vulnerability to many diseases decades later, from heart disease and obesity to schizophrenia. Allergies and asthma seem to follow the rule as well.”

“Which brings us to farm milk (farm milk is Europe’s name for raw milk). In Europe, the consumption of unpasteurized milk has repeatedly correlated with protection against allergic disease. In America, 80 percent of the Amish studied by Dr. Holbreich consume raw milk. In a study published earlier this year, Dr. Schaub’s group showed that European children who consumed farm milk (raw milk) had more of those regulatory T-cells, irrespective of whether they lived on farms. The higher the quantity of those cells, the less likely these children were to be given diagnoses of asthma. Here, finally, is something concrete to take off the farm.”

But They Still Don’t Want You to Drink Raw Milk

One still needs to read between the lines as you read research like this. Doctors today, as in farmer Jesty’s day, work in a very political environment. So we do need to anticipate the politically correct disclaimers and doublespeak. Even in the face of the undeniable truth they observed among the raw milk drinking Amish farmers and their children, the standard cover-my-backside disclaimer was still predictably there.

“None of these scientists recommend that people consume raw milk… Rather, they hope to identify what’s protective in the milk and either extract it or preserve the ingredients during processing…Yet how to apply that therapy deliberately remains unclear… By emulating this naturally occurring phenomenon, scientists may one day devise a way to prevent allergies… This task, though still in its infancy, has some urgency… The challenge of identifying the important exposures–and getting them into a bottle–is a pressing one.”

Oh yes…a bottle! We can help with that. You mean like a Family Cow raw, Holistic Honey bottle capped with pollen and propolis and bits of honeycomb to boost immunity? Or you mean a bottle of Family Cow raw milk…state verified clean and safe and lab tested to be pathogen free yet complete with a biodiversity of probiotics, and enzymes? Or maybe a Family Cow kombucha or kefir bottle chock full of wild yeast cultures and zillions of biodiverse microbes and dozens of strains of living, health giving enzymes?

P.S.  It is very important to keep in mind that even at 7%, the allergy rate is not zero among farmers and raw milk families. There are still 7 out of 100 who will have allergies even though they grew up on a farm. It’s important to remember this because, again, the nay-sayers are very quick to point out that they, or a friend, grew up drinking raw milk and still has allergies. I thought I’d better prepare you for this because you will be sure to hit this objection if you share this info with raw milk doubters. Some people are weak on understanding statistics. Or else they just do not want to know. It’s usually not hard to tell the difference!

P.P.S  For more research to prove that embracing a diversity of microbes confers vibrant health, explore it for yourself. Google “Hygiene Hypothesis” or “Human Gut Biome.” Read Michael Pollan’s masterpiece: Some of My Best Friends are Germs.