You are here: Home / In the Kitchen / Five Ways to Make Your Own Sour Cream 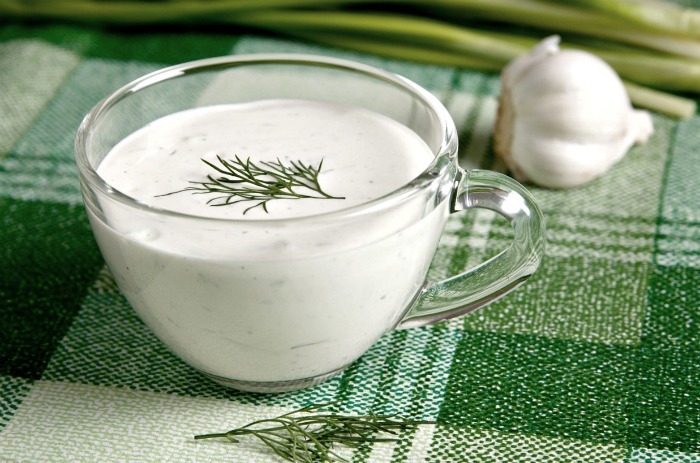 Sour cream is just yummy. Plain and simple. What’s a baked potato without sour cream? Or one of my favorites, beef stroganoff? Must. have. sour cream. It’s easy to make your own sour cream and that means you can control the quality and save money in the process.

And like yogurt, good quality sour cream contains live, probiotic cultures. It’s made by fermenting cream with a bacterial culture which sours and thickens the cream.

Here are five ways to make your own sour cream. For each, you’ll need fresh cream and a culture. I prefer raw cream, but pasteurized works, too. Just don’t use ultra-pasteurized cream, which will yield inconsistent results.

Sour cream made from raw cream may be thinner than that made from pasteurized cream. We have a source for the most amazingly thick raw cream and I’ve never had a problem with it being runny. Making sure that the raw cream is fresh assures better results.

1. Start With a Sour Cream Culture From a Friend

Obviously the most economical way to make your own sour cream is to obtain a starter culture from someone who is already making it. All you’ll need is 1 Tablespoon of their sour cream. Mix this into 1 cup of heavy cream, cover, and allow this to culture in a warm spot (70°F to 77°F is ideal) for 18 – 24 hours, or until the sour cream has thickened. Refrigerate.

Ok, admittedly I have not tried this. If you do decide to use store-bought sour cream as your starter, read the label carefully and be certain that it contains live cultures. Do not use any brand that adds fillers or additives. Proceed as you would with the above instructions. Note that commercial sour cream may not be able to be re-cultured multiple times.

3. Make Your Own Sour Cream with an Heirloom Buttermilk Starter

Another way to make your own cultured sour cream is to use heavy cream and a high-quality purchased culture. There are specific cultures for making sour cream but they are one-time use (we’ll get to this in a bit). To make traditional sour cream which can then be used to start the next batch, use an heirloom buttermilk starter, which can be purchased here.

Simply mix one package of the dried buttermilk starter with up to 1 quart of heavy cream. Cover and allow this to culture in a warm spot (70°F to 77°F is ideal) for 18 – 24 hours, or until the sour cream has thickened. Refrigerate.

As with purchased sour cream, be sure that the buttermilk you purchase contains live cultures, and no additives.  Add 1 Tablespoon of cultured buttermilk to 1 cup of heavy cream. Stir thoroughly. Cover and allow this to culture in a warm spot (70°F to 77°F is ideal) for 18 – 24 hours, or until the sour cream has thickened. Refrigerate.

5. Use a Direct-Set Sour Cream Starter

With direct-set sour cream starter, you add a starter culture to cream and allow to set as with all the other methods. Direct-set is a single use culture; you cannot use the sour cream made this way to start your next batch. If you only use sour cream occasionally, this is a good way to go because you don’t have to maintain a starter as with the heirloom buttermilk starter. Direct-set starter may be purchased here.

To make direct-set sour cream, add one package of starter to 1 quart of heavy cream. Stir thoroughly. Cover and allow this to culture in a warm spot (70°F to 77°F is ideal) for 18 – 24 hours, or until the sour cream has thickened. Refrigerate.

To keep your culture alive, always save at least 1 Tablespoon of your sour cream per cup of cream you want to sour to use as a culture for your next batch. Ideally you’ll want to make a new batch once a week, which is why I only make one cup at a time. Even I, sour cream lover that I am, do not generally use more sour cream than that.

If you don’t have a nice warm spot to culture your sour cream, try pouring boiling water into a second container and placing it under a towel with the jar of cream you are culturing. Re-heat the water every few hours as necessary.

Once you have established your sour cream culture (after 2 or 3 batches), you can culture your cream by adding 1 Tablespoon of the previous batch to 1 cup of heavy cream and immediately placing this in the refrigerator. It will take several days to a week for this to then culture. I have found that using this method allows me to make a new batch less frequently.

Do you make your own sour cream? What other tips and tricks do you have?

Two Ways to Make Homemade Yogurt Without a Yogurt Maker 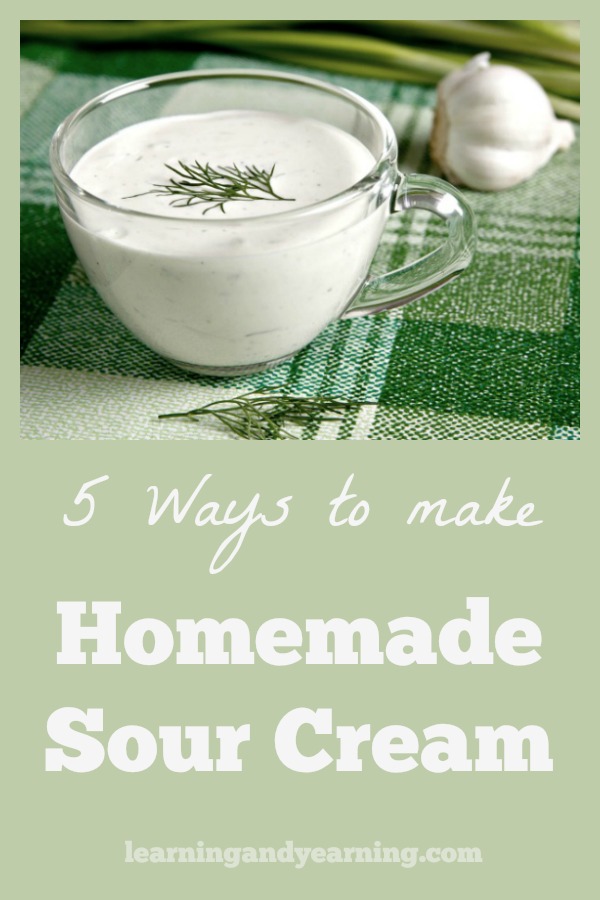