You are here: Home / Foraging and Wildcrafting / How to Forage Ostrich Fern Fiddleheads
175
Shares 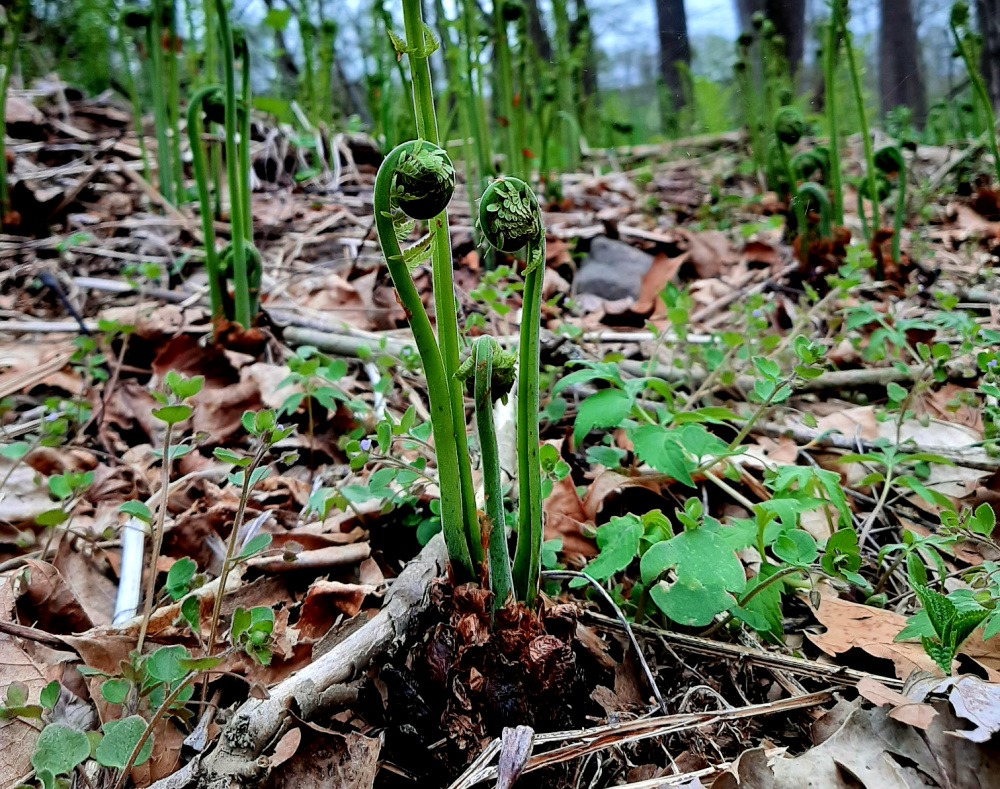 What are Fiddlehead Ferns

Fiddleheads are simply the furled fronds, or tender shoots, of a young fern in spring. As the fiddlehead unfurls, they become the ferns new frond, or leaf. Their name comes from their resemblance to the scroll head of a violin and can be found throughout most of the NE U.S. and all of Canada. And they are a wonderful plant for spring foraging.

The ostrich fern, Matteuccia struthiopteris, is native to North America and grows 3 – 6 feet in moist woodlands and other damp, shady areas. We have often found them growing in the flood plain of streams.

The fiddleheads emerge early to mid-spring. These fronds are sterile, but a few weeks later shorter fronds will appear which are fertile and produce spores for reproduction. These fronds will only reach 12″ – 20″.  It is this fertile feather-like frond for which the ostrich fern is named.

The distinguishing marks of an ostrich fern are its smooth, green stalk, with a deep U-shaped groove similar to a stalk of celery.  There will be no fuzz on the stem.

Ostrich fern fiddleheads are about an inch in diameter and have a light brown, parchment paper-like covering which is easily removed. 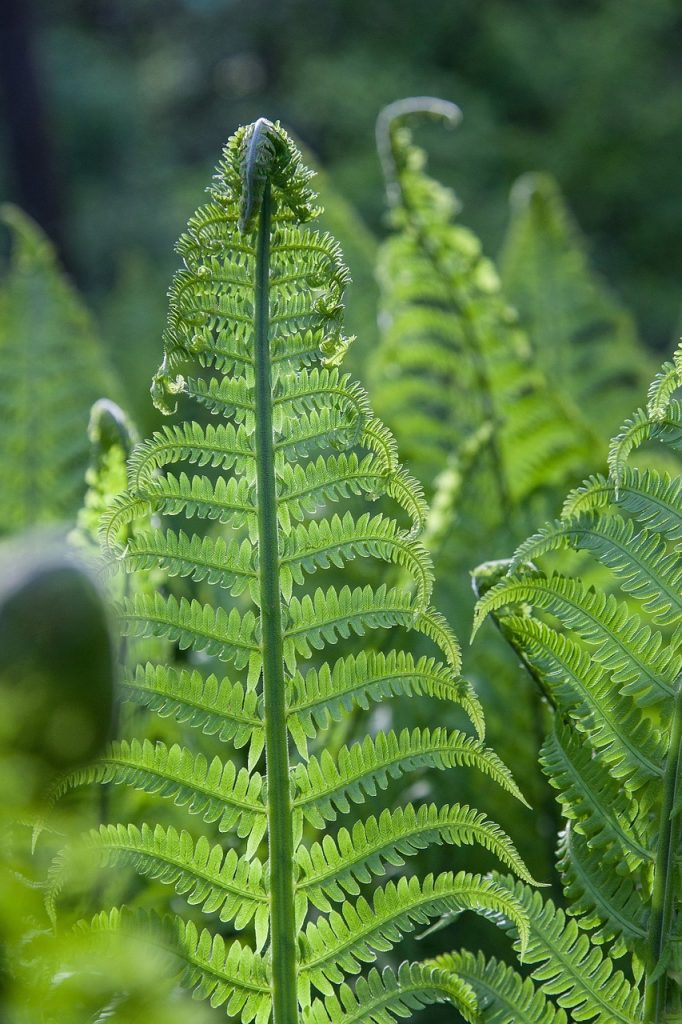 If eaten raw, fiddleheads can certainly cause illness including nausea, vomiting, and diarrhea, although some foragers do eat an occasional fiddlehead raw.  Your best bet is to always cook your foraged fiddleheads thoroughly.

How to Pick Fiddleheads

Forage fiddleheads while the fronds are still tight by snapping the stem several inches below the curled frond. Some harvest only the fiddlehead, but the stem is just as delicious.

Be sure to harvest no more than half the fiddlehead from each plant so that it can go on to photosynthesize and reproduce. 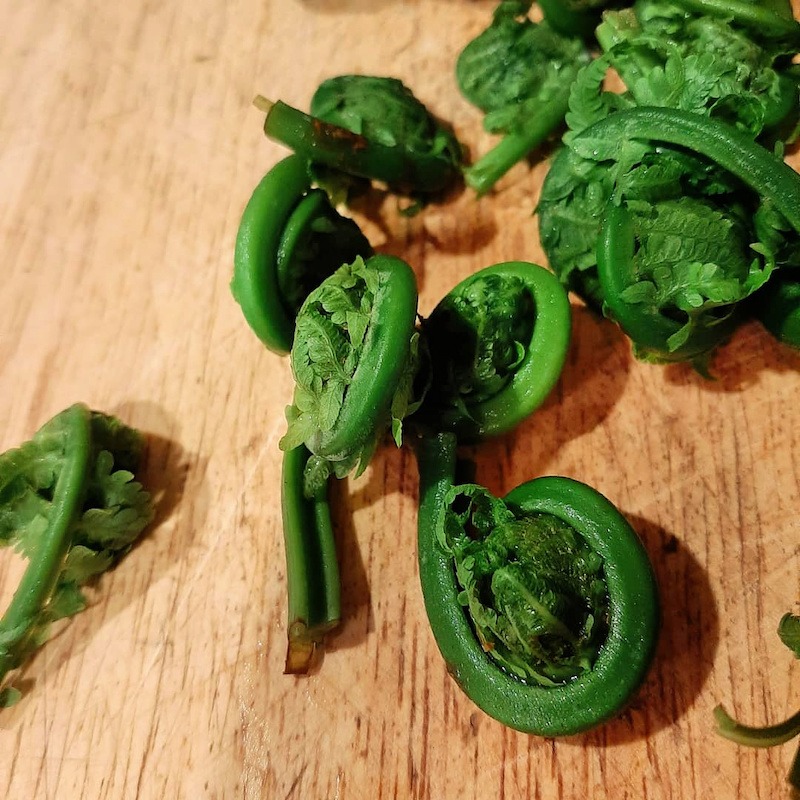 How to Prepare Fiddlehead Fern

Remove the brown papery husk, and then wash fiddlehead fern thoroughly in cold water before preparing them. It is best to boil or steam them for 10 minutes since it is important to cook them thoroughly. Then you can go on to prepare them as desired. After steaming we like to simply lightly sauté them in butter.

But fiddleheads can be prepared in a number of ways. Think asparagus and you’ve come up with several ideas already – you can roast them, grill them, pickle them, use them in a cream soup, put them in a quiche . . .

Ostrich fern fiddleheads can also be blanched, cooled, and then frozen for future use.

Since I have only harvested and used ostrich fern, I don’t feel qualified to address the topic of other edible species of ferns. This article on fiddleheads from Foragers Harvest may be helpful to you.

The Forager’s Harvest by Samuel Thayer

Botany in a Day by Thomas J. Elpel

How to Forage and Make Dock Seed Flour

How to Identify Pine, Spruce, Fir and Hemlock and Use in Food and Remedies

Pickled Fiddleheads from Practical Self Reliance 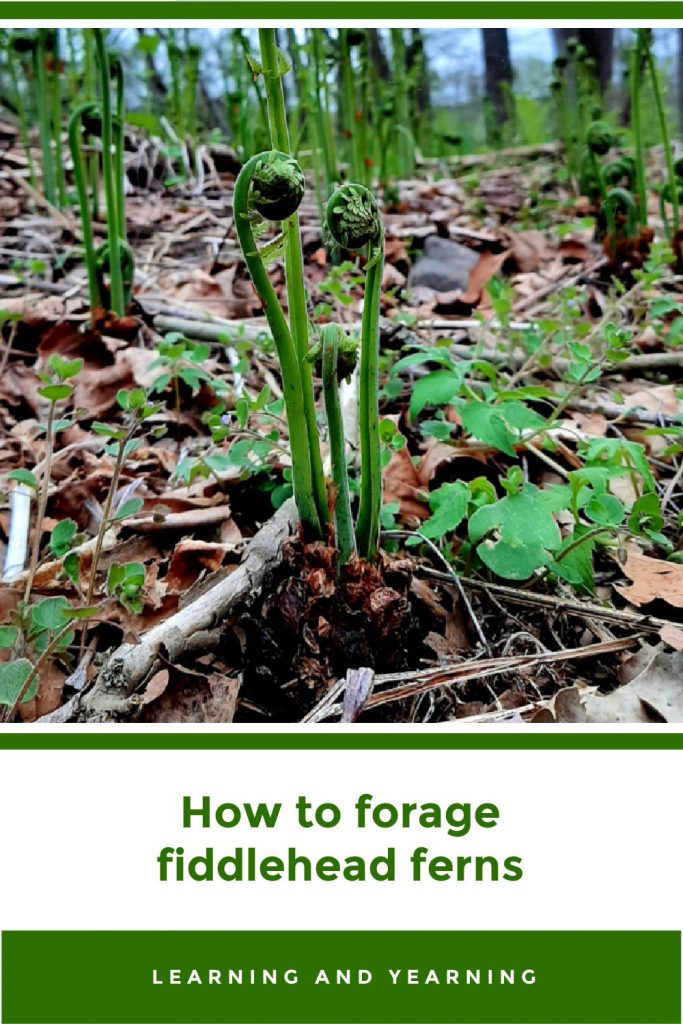